Heracleum mantegazzianum, more commonly known as Giant Hogweed, first came to the UK from Central Asia in the 19th century and was initially praised for its ornamental beauty. With its white flowers and thick stem, it is often mistaken for common hogweed, elderflower and even Queen Anne’s Lace.

Now considered one of Britain’s most pernicious non-native, invasive plants, Giant Hogweed now plagues footpaths, riverbanks and parks all across the UK and can cause great harm if it comes into contact with skin.

When it comes into contact with skin, Giant Hogweed can cause severe burns and even make skin more sensitive to strong sunlight. The furocoumarin toxins do this by preventing the skin from protecting itself against sunlight, leading to very bad sunburn and scarring. Although symptoms will vary from one individual to another, Giant Hogweed is particularly dangerous for children. And if the sap comes into contact with eyes, it can cause blindness.

The toxicity in Giant Hogweed isn’t limited to just the sap, leaves, and stems, roots, flowers and seeds should all be avoided. Merely brushing the leaves or stem of Giant Hogweed can be enough cause a reaction. A bad reaction can come up in 48 hours and consists of painful blistering which will take a long time to heal.

This can then develop into phytophotodermatitis, also known as Lime Disease (not to be confused with Lyme Disease), which makes skin hypersensitive to ultraviolet light.

Send us a message

Thank you! Your submission has been received!
Oops! Something went wrong while submitting the form.

How to identify Giant Hogweed

Giant Hogweed is a horrible plant, and best avoided. If you do discover it on your grounds, the best thing to do is contact a professional removal company, like Japanese Knotweed Specialists who will be able to eliminate the weed with herbicide. If you do need to remove it yourself, then be sure to take all precautions to prevent it coming into contact with your skin: use long, waterproof gloves and eye protectors in case of sap splattering out.

You should also apply sunscreen as an extra layer of protection. Try to avoid working with the plant while the sun is bright; there is no good time to deal with Giant Hogweed, but you will have more luck after sunset. 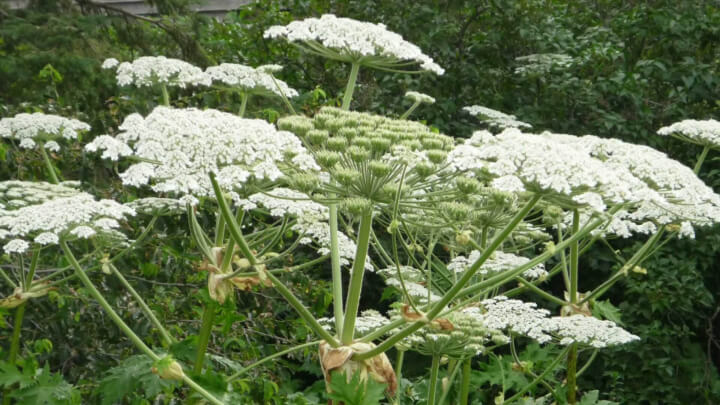